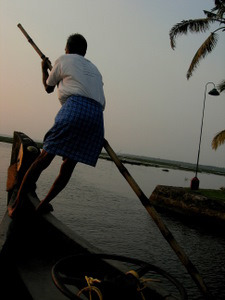 The brown banana boat wobbled like a village drunk, swaying this way and that, as I tried to step in. The boatman, standing at the helm, one hand on his waist, the other on a long wooden pole, assured me there was nothing to worry about. His accent was thick, his English was broken. Unlike the resort staff, he was dressed informally, in a once-white tee shirt and a yellow-blue folded-up lungi.

Once we’d settled down -the wooden seat was covered with a soft red cushioned, he swung into action. He had one foot on the quay and the other in the boat as he untied the rope tethering us to land. And then like an Olympic athlete, he swung the elongated wooden oar, lifting it across and above his body, and into the water, pushing the boat through an uncontrolled sprawl of water hyacinths, and into Kerala’s backwaters.

Soon enough the lavish resort properties gave way to local villages. We sailed past temples and churches, shacks and villas, abandoned toys and drying laundry. Kids playing along the water waved at us and we waved back. Everything was dense and green and humid and muddy. The silence magnified every tiny sound. The water parting under the force of the oar; insect and bird sounds; the occasional clanging pots; a lone scooter puffing along the little road beyond the water.

The boatman kept up a steady stream of commentary. That was where a famous actor was born. This was the village Arundhati Roy came from. That was a highly recommended local restaurant. This one was not.

When we sailed past an under construction houseboat, he even explained the complex art of houseboat building.

“It will take at least four more months before the boat will be used. Minimum.”

He also mentioned that the owner of said houseboat could well afford the costs involved (“He lives in the Gulf. Very, very rich man”), so there was no need for alarm.

The boatman twisted the oar once again and willed the boat into a tiny stream. The muscles along his arm were well defined and belied his age. The glistening sweat spoke of the effort that was otherwise invisible.

“This is my village,” he said as we passed another settlement, a mass of small homes hidden under thick green foliage, protecting the village from prying eyes. By the bank, not a few feet away from us, a middle aged woman, in a purple housecoat, crouched by the water. She was cleaning a pair of traditional Indian brass lamps in a forceful 1-2-3 scrubbing action. She looked up but for a second, giving the boatman a small nod. He returned her greeting and powered on.